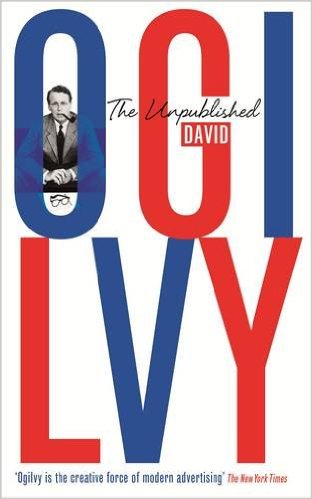 Just like Harry Gordon Selfridge, David Ogilvy is one of the greatest marketing men you’ve never heard of. Ogilvy’s actions did not immediately take the world of retail by storm, but his philosophies on writing, leadership, and company culture have changed the way many — including myself — look at marketing, writing, and life.

Ogilvy wrote several books on advertising, including Confessions of an Advertising Man, which some think makes him the inspiration for Mad Men’s Don Draper. That book is next on my list, but I also recently picked up The Unpublished David Ogilvy, a collection of some of his speeches, interviews, memos, and private letters.

Everything Ogilvy wrote was lean, crystal clear, and spot-on for the occasion; his 10 Tips on Writing memo is one of the best things I’ve ever read.

He attributed his success to his natural inclination for research — he spent more time reading and analyzing his clients than he did slopping out copy. He believed that consumers were much smarter than advertisers gave them credit for, and urged his employees to treat them respectfully.

The consumer isn’t a moron; she is your wife. You insult her intelligence if you assume that a mere slogan and a few vapid adjectives will persuade her to buy anything.

He knew where to focus his writing efforts.

On the average, five times as many people read the headline as read the body copy. When you have written your headline, you have spent eighty cents out of your dollar.

Our business is infested with idiots who try to impress by using pretentious jargon.

Another of Ogilvy’s most famous writing projects is The Theory and Practice of Selling the Aga Cooker, first published in 1935 and given to all of Aga’s door-to-door salesmen. It was described by Fortune magazine as “the finest instruction manual ever written,” and I think they might be right.

The best writers can make anything — even salesman how-tos — exciting to read.

Every time an employee was promoted to a head of office in Ogilvy’s company, he or should would receive a matryoshka doll, or Russian nesting doll. As he or she opened each doll, they would find inside a slightly smaller doll, then a smaller, then a smaller. Inside the smallest doll would be a piece of paper.

Ogilvy despised leaders who protected their own positions by hiring incompetent subordinates. He wanted leaders who would put the needs of the company ahead of their own egos.

Companies that have cultivated their individual identities by shaping values, making heroes, spelling out rites and rituals, and acknowledging the cultural network have an edge.

In my experience it’s rare to find an organization that can plainly state their values (nevermind actually living up to them). These are a company’s “soft” features, but I think they matter just as much as their performance — because the former impacts the latter.

Ogilvy wrote a lot about corporate/company culture, a lot of which sounds pretty familiar.

Never Write an Advertisement Which You Wouldn’t Want Your Own Family To Read. You wouldn’t tell lies to your own wife. Don’t tell them to mine. Do as you would be done by.

Basically it all comes down to treating people like human beings. Not a crazy or original idea, but one I think some companies have trouble with.

Allowing yourself and your employees to have fun with their work is something Ogilvy considered critical to doing good business — if people are miserable, they won’t be able to do their best work.

This philosophy doesn’t surprise me in the least — Mr. Ogilvy seems like he possessed a healthy sense of humor himself.

Develop your eccentricities while you are young. That way, when you get old, people won’t think you’re going gaga.