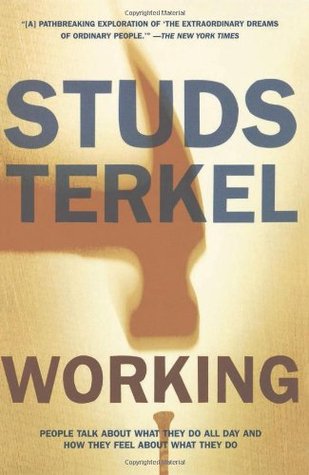 What is work? Is it just something that gets us a paycheck, or does it give our lives meaning? Is some work better or more valuable than others?

In 1974 the historian and radio broadcaster Studs Terkel published Working: People Talk About What They Do All Day and How They Feel About What They Do. The book contains dozens of transcribed interviews with miners, sex workers, waitresses, caregivers, executives, paperboys, and housewives.

Each interview is a peek into a different life, a snapshot of each person’s experiences and hardships and joys and fears and worries.

At the heart of each interview is the idea that life is difficult, and that finding meaning in your work is what makes that life worthwhile.

The dawn of a new era

Working was published at an interesting time in America’s history. Mechanization and computerization had just begun its takeover, unions were experiencing a resurgence, and the entire country was finally coming to terms with the Civil Rights Movement.

The interviewees’ stories reflect these unique feelings and experiences. But they also feature themes that have always existed: the importance of finding meaning in your work, the challenges of being a small wheel in a big machine, and the inevitable “young people these days aren’t interested in hard work” complaint.

In their own words

The book is divided into nine big chunks, each focused on something like “Working the Land,” “Communications,” and “Reflections on Idleness and Retirement.”

For me, the most interesting interviews happen near the middle of the book. Terkel interviewed several activists, and their words ring as true today as they did in 1974.

The white-collar guy is scared he may be replaced by the computer. The schoolteacher is asked not to teach but to babysit. God help you if you teach. The minister is trapped by the congregation that’s out of touch with him. He spends his life violating the credo that led him into the ministry. The policeman has no relationship to the people he’s supposed to protect. So he oppresses. The fireman who wants to fight fires ends up fighting a war. People become afraid of each other. They’re convinced there’s not a damn thing they can do.

The problem with history is that it’s written by college professors about great men. That’s not what history is. History’s a hell of a lot of little people getting together and deciding they want a better life for themselves and their kids.

Most of the interviewees do not have jobs that we consider glamorous or engaging or even particularly valuable. But many of them are so passionate about what they do, and get the greatest joy from what others might consider the smallest things. Like Babe, a grocery store checker:

I use my three fingers [on the register keys] — my thumb, my index finger, and my middle finger. The right hand. And my left hand is on the groceries. They put down their groceries. I got my hips pushin’ on the button and it rolls around on the counter. When I feel I have enough groceries in front of me, I let go of my hip. I’m just movin’ — the hips, the hand, and the register, the hips, the hand, and the register…You just keep goin’, one, two, one, two. If you’ve got that rhythm, you’re a fast checker. Your feet are flat on the floor and you’re turning your head back and forth.

And Dolores, a waitress:

Some don’t care. When the plate is down you hear the sound. I try not to have that sound. I want my hands to be right when I serve. I pick up a glass, I want it to be just right. I get to be almost Oriental in the serving. I like it to look nice all the way. To be a waitress, it’s an art. I feel like a ballerina, too. I have to go between those tables, between those chairs…It is a certain way I can go through a chair like no one else can do. I do it with an air. If I drop a fork, there’s a certain way I pick it up. I know they can see how delicately I do it. I’m on stage.

Neither of these women feels demeaned by their works — in fact, they have some choice words for those who see them as “just” a checker or “just” a waitress.

Many of the interviewees compare the past to the present; some make predictions about the future of work and their industries. I see some of those predictions coming true.

Some people are hopeful about the future, others aren’t. But they all wanted readers to know that what they do matters. I don’t think that desire will disappear anytime soon.

(I read this book as part of the Monthly Motif Challenge. November’s challenge was to read non-fiction book.)