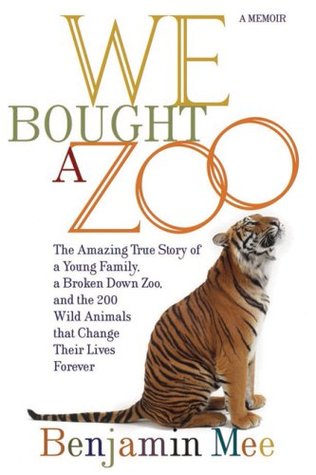 Life takes you strange places. Benjamin Mee always loved animals, but he never thought it would lead to buying a zoo. He also never imagined embarking on such an adventure without his beloved wife, Katherine.

But that is where he finds himself: elbows deep in paperwork and big cats, working with his family to revitalize a failed zoo in the south of England.

We Bought a Zoo is Mee’s chronicle of his family’s two-year journey toward zoo ownership. What started as a lark soon became a vocation, a calling to save the animals and the people at Dartmoor Zoo.

Talk about a bold move

You know what probably doesn’t make life easier? Sinking all your money (plus your siblings’ and mother’s) into buying a zoo.

It started out as a pipe dream, a wild hare that no one imagined would take over their lives. But the more Mee learned about the zoo — its animals and its people — the more he saw his ownership as stewardship.

While it’s always better for animals to live in their natural habitats, sometimes zoos are the only thing standing between an animal and extinction. A zoo closure means stressful travel or even death for animals. Mee was determined that that wouldn’t happen.

We Bought a Zoo is a timely reminder to care about the world around me, to follow my passions, and to do what makes me happy, even if other people think I’m crazy.

We Bought a Zoo was adapted into a film starring Matt Damon and Scarlett Johansson in 2011. The filmmakers decided to set the script in Southern California, probably so it would appeal to an American audience and so they could cast top American talent.

It also introduced the love interest angle. It made for a nice movie, but wasn’t more interesting than Mee’s original story. That said, there are some great moments that made the film a truly wonderful experience.

I can’t say whether the book or movie is better — they’re too different for direct comparisons. Suffice to say they’re both wonderful, and you should check them out.

(I read this book for the Monthly Motif Challenge. May’s challenge was to read a book that has a movie based off it.)