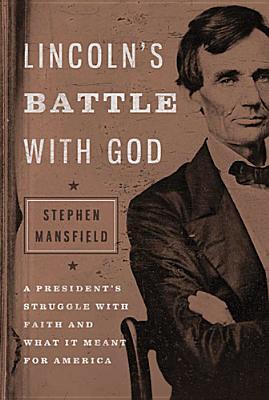 The debate over whether or not Abraham Lincoln was a “real” Christian began before he was elected to political office, and continues over 150 years after his assassination. He was an avowed atheist in his youth; yet Mary Lincoln said that her husband’s last words were a whispered longing to travel to Jerusalem and walk in Christ’s steps.

Lincoln’s Battle with God: A President’s Struggle with Faith and What It Meant for America is author Stephen Mansfield’s attempt to trace the development of Lincoln’s faith throughout his lifetime. What caused him to distance himself from religion as a young adult, what brought him back to a belief in God, and what could that journey mean for us?

Lincoln is one of my heroes, and I’m always excited to read anything I can about him. But I was surprised to see Lincoln’s Battle with God on the shelf at the library. Most of the Lincoln books I’ve read don’t focus on this aspect of his life, and it never really mattered to me whether or not Lincoln was religious.

But it shouldn’t be surprising that Lincoln wrestled with religion. His mother’s death when he was still a child left him at the mercy of a dictatorial Calvinist/Baptist father, and he lost two young children to horrible illnesses. He was elected to lead a country that was coming apart at the seams, and presided over the deadliest years in American history.

Lincoln was raised in a faith that decreed everything pre-ordained. God was distant and detached, allowing bad things to happen simply because they were “supposed to.” Lincoln believed from a young age that he was both gifted and cursed — that he had been granted knowledge and ambition so that he would be forced to experience humiliation and degradation.

Lincoln spent his young adulthood in New Salem, Illinois, where he gained a reputation as an “infidel.” The poetry of Robert Burns and the writings of Thomas Paine reinforced Lincoln’s opinion of Christians as arrogant and hypocritical, and pushed him further away from religion; friends heard him call Jesus “a bastard,” and he called the Bible a book of contradictions.

How did Lincoln go from “infidel” to expressing a desire to visit Jerusalem? Mansfield believes it was a gradual process, informed by Lincoln’s reading, thinking, and life experiences. Lincoln came to believe himself to be God’s instrument, placed on earth to fulfill God’s purposes rather than man’s.

I’m not sure Lincoln ever became a Christian — but his faith is something I would love to emulate.