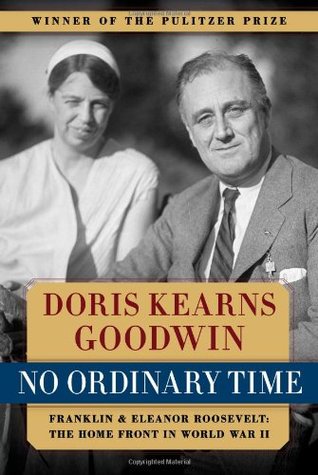 When Hitler began his invasion of Western Europe in May 1940, Franklin Roosevelt faced a dilemma. He was part-way through his second term as President, and his New Deal was only beginning to benefit a country trying to claw its way out of the Great Depression. America’s military was at its smallest and least prepared since WWI, and few people were interested in jumping into an expensive war that was happening halfway across the world.

No Ordinary Time follows Franklin and Eleanor Roosevelt, their family, and Franklin’s closest advisors from May 10,1940 until after his death in April 1945. Author Doris Kearns Goodwin chronicles the transformation of the American military from “barely passable” to one of the strongest forces on the globe, the shifts in culture that brought more women and African Americans into the workforce, and changed the course of history.

After wooing me with Team of Rivals and The Bully Pulpit, I knew I could expect great things from Doris Kearns Goodwin for No Ordinary Time. The book is well-researched, fascinating, and incredibly tight despite its massive scope.

FDR held the office of President for more than 4,400 days (he died less than 30 days into serving his fourth term), and accomplished an unbelievable amount in that time. He led the country through the Great Depression and WWII, and — thanks in great part to Eleanor — pushed through some of the first legislation preventing discrimination based on gender or race.

Reading about Franklin and Churchill’s efforts at preventing Hitler from steamrolling through Europe, and preparing their own militaries and people for a hideous war, was interesting, but Goodwin never stops halfway.

No Ordinary Time is just as much about Eleanor Roosevelt as it is her husband. Eleanor was a polarizing figure — loved by those who saw her as championing domestic causes like women’s rights and civil liberties, hated by others who saw her as an aberration, a wife who didn’t know her place.

Just as interesting were the glimpses into the Roosevelt’s personal lives and their flaws: Franklin’s affair before his Presidency and his habitual flirtations, Eleanor’s inhibition, inability to forgive, and unwillingness to play second fiddle to Franklin.

I appreciate that Goodwin did not hide or ignore these flaws. They are what made the Roosevelts human, and contributed to the decisions they made while they lived. I finished the book having developed a great respect for the couple, as well as a healthy dislike for some of their choices.

WWII brought some of the biggest changes to the American military, culture, and political landscape. Many of the changes were brought about by Franklin and Eleanor Roosevelt, and yet most of us know little about who they were.

No Ordinary Time is a detailed peek into the lives of those living at the White House during one of America’s most trying times, and it should be required reading.