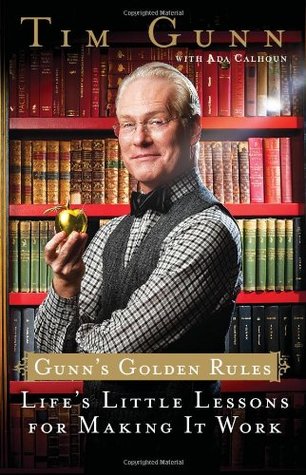 Tim Gunn is best known for his work on Project Runway, where his “Make it work” anthem rings repeatedly in the ears of designers and viewers alike. It’s been Gunn’s mantra for at least a decade, so of course it had to be the title of his book.

Gunn’s Golden Rules: Life’s Little Lessons for Making it Work is something of a modern manners book — with a dash of memoir and a heaping spoonful of gossipy stories. By following the rules he sets out, Gunn believes that anyone can make their own lives better.

I’m a sucker for good manners. I believe that the little things — holding open doors, saying “please” and “thank you,” and knowing your soup spoon from your teaspoon — are what separate us from lower life forms, and are the only things that can save humanity from total ruin.

Upon hearing the word “manners,” a lot of people roll their eyes or start freaking out about which side of the plate their napkin should go on. There’s a lot of outdated manners advice out there; people either try to follow some of it and lose their minds, or ignore it completely and behave rudely.

And that’s one of my favorite things about Gunn’s book. He distills all advice down to a single thought: “Manners are simply about asking yourself, What’s the right thing to do?”

Gunn goes into much more detail, of course. He shares 18 rules, everything from “The world owes you nothing” to “Be a good guest or stay home” and “Take risks!”. I agree with all of them, and hope I can remember them going forward (hello there, “Use technology; don’t let it use you”!).

That, not so much

Gunn illustrates each of his rules by telling stories of the true, ridiculous things he has seen in show business and academia.

While I like that idea, I think his execution was flawed. Most of the stories feel less, “Here’s a valuable illustration of this rule” and more like, “Here’s this story that makes so-and-so look bad, and probably feel bad, too.” This is completely counter to the premise of the book: how to make life better for yourself and others.

I don’t think this was Gunn’s intention — he’s never outright mean or snarky — but for me it detracted from the book’s merits.

Same with the stories he tells about his mother (and to some extent, his father). He uses her behavior to illustrate how not to behave, and goes into detail many times about how frustrating and challenging their relationship is. Is airing your dirty laundry and clearly unresolved feelings about how you were raised “the right thing to do”? I’d say no, but that’s just me.

Take the good, leave the bad

There’s a reason I don’t read things authored by people who make any part of their living on reality television: it’s always feels just a little bit seedy.

I didn’t enjoy the alternatively gossipy and preachy feel, but overall I enjoyed Gunn’s Golden Rules. If nothing else, it was an excuse to read and talk about manners — something we can never have too much of.

(I read this book as part of the Monthly Motif Challenge. August’s challenge was to read a book from a genre that you don’t normally read from.)