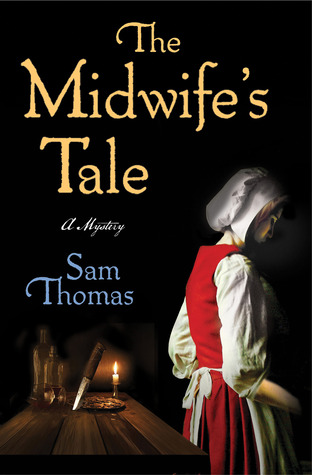 It is 1644 in York, England; while most of the town’s citizens think the greatest danger sits encamped outside the city, midwife Lady Bridget Hodgson and her assistant Martha know better. Esther Cooper stands accused of poisoning her husband, and Bridget and Martha have just a few days to save their friend from her demise at the stake.

What starts out as an attempt to clear her friend’s name soon turns into a deadly game of cat and mouse for Bridget, with every investigation turning up more questions. Was Stephen Cooper really the man he claimed to be? Is Esther truly innocent? Who profits the most from keeping Stephen’s murder unsolved?

The Midwife’s Tale is a commentary on the nature of treason and the servant-master relationship, as well as a pretty good murder mystery.

Strong female characters are my favorite, and this book has two. Bridget is a twice-widowed heiress who spends her time delivering babies to wealthy and poor women alike and chooses to investigate a man’s death in order to prove her friend’s innocence; Martha is a servant girl turned thief to escape a horrifying life.

The Midwife’s Tale was nicely paced, with several well-done red herrings and twists that had me holding my breath. Bridget and Martha are likeable, flawed characters for whom I couldn’t help rooting.

But it could have been better

As much as I enjoyed The Midwife’s Tale, it simply can’t hold a candle to Arianna Franklin’s Mistress of the Art of Death series. Bridget and Martha were great characters, but they didn’t feel complete — the dozen or so other characters around the periphery even less so.

This is partly explained by the fact that the book is the first in author Sam Thomas’ Midwife Mysteries series — there’s a lot of exposition and backstory that has to happen. But I don’t recall getting that same feeling from Franklin’s series. Just because it’s a first book doesn’t mean the author should skimp on details.

More than a dose of social commentary

In many ways I feel like the author really wanted to write about the esoteric aspects of treason and explore the historical servant-master relationship, but his publisher convinced him it wouldn’t sell unless he wrapped a mystery around it — just like Umberto Eco’s The Name of the Rose, but with far better success.

It’s positively miserable reading about the way that many of the characters treat their servants, or are treated by their masters.

Masters had power over their servants’ bodies, and short of murdering them (usually) could do whatever they wanted. This was considered by the courts and contemporary culture as the way it should be, with masters having near-divine power over their servants. A servant’s disturbing that belief — through running away or attacking or killing a master — was seen as the worst kind of treason: a betrayal of God’s plan and word.

In the end I found the mystery side of The Midwife’s Tale entertaining, but it’s Thomas’ commentary on contemporary culture that stuck with me. I hope he keeps writing — especially if his next book is non-fiction.