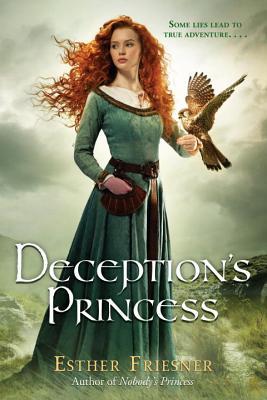 Princess Maeve has been her father’s favorite child since the age of five, when she tricked and outran his herds’ devilish black bull. And now that he is High King, Maeve is the favorite of many — particularly those looking to gain a kingdom along with a wife.

Maeve is not interested in being the sacrificial lamb; she believes she should control her own destiny. With an intimate knowledge of court life and intelligence beyond her years, Maeve knows when to be silent and when to speak out, which suitors to repel, and which visitors to flatter.

Her choreographed steps falter when she meets Odran, a traveling druid-in-training. For the first time in her life she has a friend, one who encourages instead of discouraging or ignoring her. Now Maeve must decide whether to trust her High King father’s plan, or her heart.

A heroine I can get behind

The summary makes it sound a little sappy, but Deception’s Princess was surprisingly complex. It’s what I was hoping for when I read Hild: a nice mix of storytelling, history, and politically savvy women.

Maeve is young, but smart. She puts her foot in her mouth often, but is quick-minded enough to flatter or outwit her opponent. She does a lot of growing throughout the book, which is bittersweet. On one hand I was glad to see her become a stronger person; on the other, sad to see her slowly start looking at life through jaded adult eyes.

Deception’s Princess is fairly low on action and angst, with most of the story happening in Maeve’s head (rather than in actions by anyone else). If you like books about life at court, political intrigue, and strong heroines, this might be just what the doctor ordered.