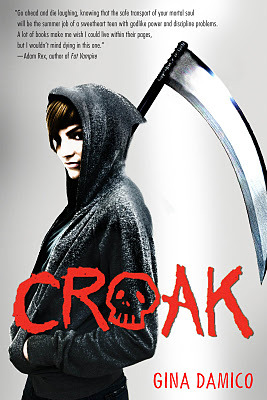 Lex Bartleby is 16 and a complete nightmare. Her grades are in the toilet, she’s constantly fighting with classmates and her family, and she’s this close to getting expelled. So she’s mad, but not surprised, when her parents drop her on a bus to the middle of nowhere to stay with her Uncle Mort for the summer. He’s got a farm in upstate New York, and supposedly shoveling cow crap will magically change Lex’s bad attitude.

But it turns out that Mort isn’t a farmer so much as…well, a Grim Reaper. And he’s going to spend the summer showing Lex the ropes.

Being a reaper is tough, but Lex is actually really good at it. Her only problem is a frequent desire to find and punish murderers — a definite no-no.

On top of that, Lex and her reaper partner keep coming across unexplainable deaths. The only thing the victims have in common are milk-white eyes. People whisper about a reaper gone rogue.

Can Lex and the other reapers uncover the truth before it’s too late?

It’s been a long time since I last read such an original YA novel. Not only is the main premise — teenage girl becomes a Grim Reaper — different, the world building blocks are unique as well (Jellyfish. That’s all I’m saying.).

Lex is a fun character. She’s prickly and not a fan of authority, but she’s also curious and has a strong ethical barometer. She’s a strong person, and by the end of Croak it’s clear she’s going to be powerful when she grows up.

Which is good, because this book got real, fast: it starts with a lot of eye rolling during a meeting in the principal’s office, and within just a few chapters shows Lex reaping souls from badly burned plane crash victims.

[pullquote]It’s been a long time since I last read such an original YA novel.[/pullquote]

I love that author Gina Damico let the characters dwell on the ethical dilemma of a vengeful reaper. They show up at the exact moment of death, pausing time and occasionally stepping around the person who pulled the trigger or wielded the knife. The reapers’ responsibility is to take the victim’s soul, not kill the criminal. But that’s what Lex wants to do, and she has trouble hating the idea of a reaper who would do so.

While the “Whodunit” isn’t exactly a surprise, the why and the how are. Big Stuff goes down in the last few chapters, setting us up nicely for the next book in the series (seriously, are there no standalone YA novels anymore?).

Croak was so much fun, and so interesting to read. Plus, death puns!