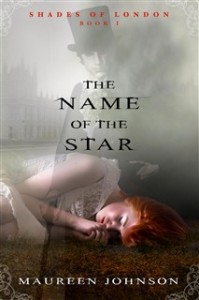 Louisiana native Rory Deveaux is out of her comfort zone at her new school in London, and not just because of the challenging academics and mandatory physical activity. A Jack the Ripper copycat killer is on the loose in the old Whitechapel district, and has the entire city on edge.

Rory manages to embarrass herself repeatedly, telling stories about her crazy Louisiana family and nearly choking to death on a piece of sausage in front of the entire school. This would be enough to seal her reputation as a total weirdo, but things are about to get even more complicated.

While she and her roommate Jazza are sneaking back into their room after-hours one night, Rory talks to a man who gives her the creeps — partly because Jazza swears he’s not there. The police are looking for a copycat killer, but Rory may be the only one who can capture him.

**Warning: Spoilers ahead. Proceed with caution.**

The thing I liked most about The Name of the Star is the world building, particularly around how it is that people gain the ability to see ghosts, and how ghosts are able to interact with the mortal world. The twist on the final page is also marvelously intriguing, and sets the reader up for the rest of the series (yep, the inevitable YA trilogy).

In the end, though, the book simply wasn’t that memorable — I just finished the book a couple days ago, but I had to reference it in order to remember the main character’s name. Not a good sign. The characters are kind of blah, the plot convoluted, and it just couldn’t hold my attention as much as I was hoping it would.

Also, and this could just be my privilege and education talking, but what teenager hasn’t heard of Jack the Ripper? On to smarter and better, please!

Was I totally off the mark on this one? Let me know in the comments if you think I’m crazy.