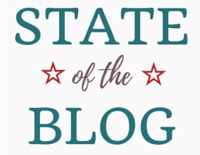 Another quarter, another State of the Blog post! The summer season is coming to a close, we’ve finally gotten some rain (thank heavens!), and it hasn’t been over 100 degrees in…four or five days, maybe?

As you might have guessed, I spent most of the summer inside. Here’s how I spent that time.

How’s your reading been going these past few months? What are you most looking forward to in the latter part of the year?