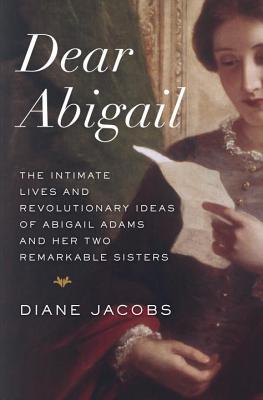 John and Abigail’s letters to each other are famous; less known are the letters between Abigail and her sisters, Mary and Elizabeth. They were separated by geography, family life, and in some cases ideology, but throughout their lifetimes relied on each other for knowledge, comfort, and humor.

In Dear Abigail: The Intimate Lives and Revolutionary Ideas of Abigail Adams and her Two Remarkable Sisters, author Diane Jacobs presents these letters as well as the Revolutionary times in which they were written.

The Smith sisters’ letters are remarkable not only because they give us a peek into America’s very beginnings as a nation, but also because they introduce us to three women who were themselves revolutionaries.

I read and enjoyed The Letters of John and Abigail Adams in 2011, but it never occurred to me that of course Abigail wrote letters to other people. Reading Dear Abigail has been one of the most enjoyable and interesting experiences of my summer.

Most of the books written about the American Revolution focus on the lives of the men who led it, and who struggled to keep the newly-fledged nation alive. It’s interesting to read a book featuring women who were just as smart and opinionated as men, and were incredibly frustrated by the limitations of being merely females.

Abigail is the most famous (as is her exhortation to John to “remember the ladies”), but her sisters were just as determined to make their own marks on the world. Oldest sister Mary became a well-respected, if unofficial, town leader; youngest sister Elizabeth founded the second co-educational school in the country. This on top of dealing with sick or abusive spouses, raising children, and keeping their own farms productive.

I loved reading about how these women viewed the war, politics and politicians, and were excited and worried for their new country’s future. Abigail in particular was always at her husband’s shoulder, advocating for the rights that would give future female generations the ability to participate in politics on (kinda sorta) the same footing as men. The sisters believed women deserved the same educational opportunities as men, and deserved the same right to decide the future of their country. They didn’t want the women of the future to have to rely so entirely on their fathers and husbands in order to survive and thrive.

While this book looks at the lives of all three sisters, it is Abigail on whom Jacobs’ writings focus most. As a Puritan wife, she believed that she must be subservient to her husband. But as a political force of her own (and eventual First Lady), she wanted to express her own beliefs about equality. Her personal and political beliefs around what being a good woman and a good wife meant changed throughout her life — her letters reflect these changes.

It was comforting to see that even as dedicated an American as Abigail Adams could at times doubt her leaders, her country, and even herself.

All three women were admirable, capable, strong human beings. They deserve acknowledgement for the way they captured history in their letters to each other, and for setting the stage for future generations of women to succeed on their own merits.

I recommend Dear Abigail to anyone — particularly women and girls — who wants to learn more about how women helped shape the United States from the very beginning.