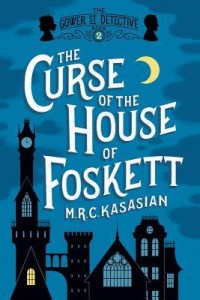 Disclosure: I received a free copy of The Curse of the House of Foskett from publisher Pegasus Books, LLC, but was not compensated for discussing/reviewing it. My thoughts on the book are my own.

It’s been several months since the disastrous case detailed by Miss March Middleton in The Mangle Street Murders, and business has been slow for personal detective Sidney Grice. His reputation is in shambles, and his normally irascible temper has grown almost violent.

But nothing peps the old man up quite like a murder in his own home, and soon Sidney and March are on the case of a family curse and a final death society whose members are dying off just a little too quickly (not to mention mysteriously).

And just when March thinks things can’t get any weirder, Sidney Grice appears to be falling in love.

The Mangle Street Murders was one of my most fun reads of 2014, and I was really excited to get my hands on a copy of its sequel, The Curse of the House of Foskett.

Sidney Grice’s reputation may not have survived his previous big case, but his “Oscar the Grouch” attitude certainly has — he’s as mean as a snake, as my dad would say. And of course he’s still brilliant.

March seems to be the one who’s done any real changing. She’s a quick study, sharper than her uncle would like to believe. This book takes you even further into her dark past, and right at the end offers up a twisted hook sure to get you pumped for the next in the series.

M.R.C. Kasasian is not a subtle writer — he drops his characters right into a complicated, gruesome set of murders and keeps them (and the reader) on their toes right up until the last chapter.

The “whodunit” is well crafted and tense, but just like with The Mangle Street Murders (and even the Sherlock Holmes stories) it all feels…convenient. Sidney is just a little too smart, his knowledge just a little too complete. It doesn’t detract much from my enjoyment, but it’s still a clear presence.

So will I keep reading the series? I don’t know. I can’t find a release date for the third in the series; I enjoy it while I’m reading, but don’t think they’re very re-readable. Jury’s still out, I guess.

Anyone else reading this series? What do you think of it?