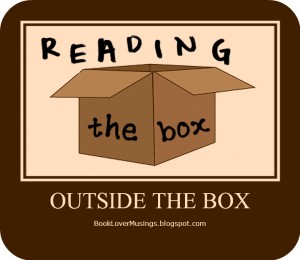 (I read this book as part of the Reading Out of the Box Challenge. This book was in the Another Voice category, in which I read a book written from a different perspective than I normally read.)

The Things They Carried is a (potentially?) partially autobiographical work by Tim O’Brien. It reads almost as a collection of short stories, switching back and forth from the present to the late 1960s/early 1970s and the author’s Vietnam War experiences.

This book was out of my comfort zone, not just because of its male narrator, but also its subject matter. My interest in reading about wars wanes at about 1865, and in my mind Vietnam is tangled up with the 1960s revolution, the Kent State shooting, and Helter Skelter.

Although I enjoyed the book, it wasn’t an easy read. The main character is in his early 20s during the war, and the men in his platoon are little more than scared boys. Much of their bravado is bullshit, and they cope with terror and death by normalizing or even trivializing it. The gore, death, and insanity of war is palpable, and it’s clear where O’Brien stands on the argument of whether or not it’s right.

The tales are very much stream-of-consciousness, a style that generally throws me off, but in this case works perfectly. The words punch hard and fast, leading to visceral reactions on the part of the reader.

The Things They Carried is a story of burdens, both physical and mental. Each man carried hundreds of pounds of gear, weapons, and keepsakes; but they also carried each other, they carried stories, they carried fear and hate and what was left of their innocence. O’Brien keeps the men of his platoon alive even after they fall on the battlefield or sink into the mire; his words bring them back so that they can continue telling their stories.