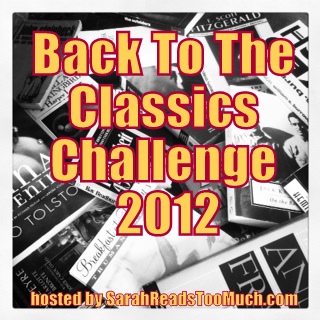 (I read this book as part of the Back to the Classics Challenge. Click on the image to see what else I’ve read and join the fun!)

Despite a life of poverty and two unhappy marriages, Janie Crawford is a cheerful soul. Fiercely independent and free of the shackles of fear, bitterness, and foolish romantic expectations, she is able to enjoy each day as it comes.

Their Eyes Were Watching God follows Janie as she falls in love, is disappointed, experiences loss, and finally comes to understand herself.

I’ve never been much of a fan of contemporary “classic” literature, and Their Eyes Were Watching God, unfortunately, did not win me over.

The biggest roadblock was the story itself. I don’t want to read a book about a girl whose “first dream [is] dead, so she [becomes] a woman.” I’m not attracted to a story where the heroine experiences bad relationship after bad relationship, and finally lands in a good one only to have it cut short in a horrible way. It’s vaguely masochistic.

While I didn’t particularly enjoy the story, though, I did really like Janie. And who wouldn’t? Even though she’s poor and stuck in an endless loop of being some man’s wife and property, she doesn’t let that break her will. She’s strong-minded and doesn’t let others’ opinions or gossip bother her. She sets off to find herself, and succeeds — and doesn’t let anyone take that away from her. Janie is positive and doesn’t let her past define her present or future. She’s a character with whom I would love to be friends.

And that made Their Eyes Were Watching God worth reading.

Published in 1937, Zora Neale Hurston’s Their Eyes Were Watching God fulfills the credit for a 20th century classic read.

4 thoughts on “Review: Their Eyes Were Watching God”