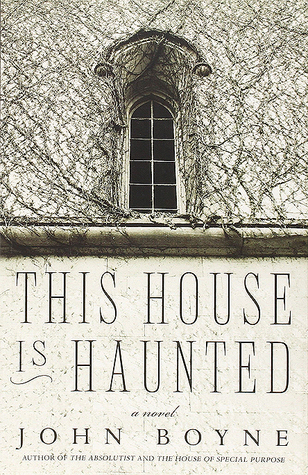 Heartbroken after the loss of her father, schoolteacher Eliza Caine is desperate to leave London. When she applies for a position as a governess at a home outside Norwich, she is surprised at her potential employer’s response: he doesn’t ask about her education or for references, or even tell her the number and age of the children she will be teaching.

Her arrival in Norwich does not allay her unease. First someone tries to push her in front of an oncoming train. Then when she arrives at her destination, she is greeted by two children who insist that she is the only adult in the house.

Eliza’s conversations with the village’s residents — including the family lawyer — do not bear much fruit either. People are afraid to tell Eliza anything about the home, the children, or their parents.

Strange and awful things are happening at Gaudlin Hall. Eliza has never been prone to hysterics; but after a pair of invisible hands tries to push her out a window, the young woman knows one thing for certain: this house is haunted.

Nothing hits the spot like a ghost story — especially one with Gothic undertones. This House is Haunted was published in 2013, but it reads like something straight from the mind of Horace Walpole or Wilkie Collins.

It starts out placidly enough, with the narrator and her father going to hear the author Charles Dickens speak. Mr. Caine is out of the way soon enough, however, and Eliza is off to Gaudlin Hall.

Her students, Isabella and Eustace, are bright but strange. Eustace always seems to be on the verge of spilling every secret he’s ever learned, and Isabella is a disconcerting mix of childish and worldly.

Eliza is smart, kind, and — as it turns out — very brave. She’s determined to learn the truth about Gaudlin Hall and its inhabitants, and to protect them if she must.

As with other novels in this genre, though, I found the characters the littlest bit flat. The plot takes precedence; every character is there to move that plot along and keep the story moving forward. I didn’t feel very connected to any of them.

The story itself was excellent, of course. Some lovely twists and a few truly chilling moments. If you’re a fan of The Woman in White or Nine Coaches Waiting, I recommend you pick up a copy of This House is Haunted.