(This month’s writing prompt is Camera: Take your camera for a walk and write based on one of the photographs you take.) 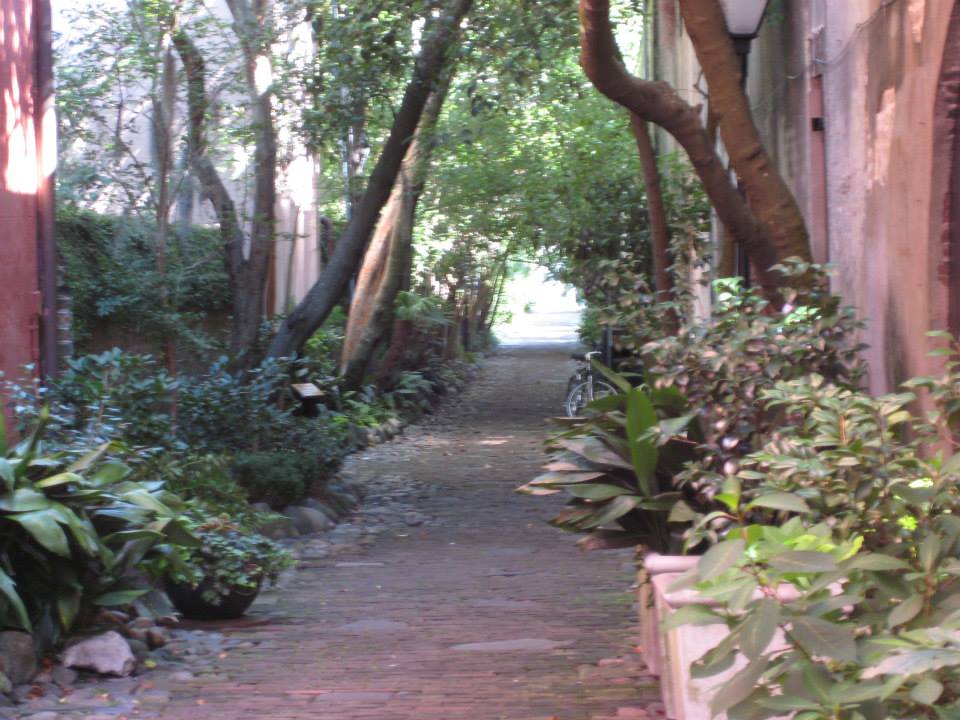 Leta pulled the last clean dish from the hot, sudsy water and set it next to the others on the counter.

“That’s the last one, Hannah,” she said, wiping her forehead with the back of her hand. The head cook looked up from trussing a chicken.

“That’s good, Leta,” she said, still working quickly while inspecting Leta’s work from a distance. “Go on and have a stretch while I finish here. When you come back we need to start on the vegetables.”

“Of course.” Leta dried her hands on her apron and stepped into the pantry to scoop up a generous amount of Hannah’s homemade liniment before walking out the side door. Charleston’s renowned summer heat meant that it was actually warmer outside than in the stuffy kitchen, but there was a nice breeze and the liniment felt good on her red, chafed hands.

She rubbed in the last of the sweet-smelling concoction and reached her hands up to the sky, twisting to a fro to stretch the tight muscles in her lower back. She took a few steps down the alley to look out on the main thoroughfare; a few carts meandered by, but mostly it was quiet.

Leta turned and headed down the alley in the opposite direction, her hands brushing over the lush plants as she walked.

Out of the corner of her eye she spotted a bicycle leaned against the wall of the neighbor’s home. The little basket on the back was filled with vegetables and neatly wrapped packages, and a sign draped across the handlebars declared that the produce inside was fresh from Wilson’s Market.

Leta hadn’t ridden a bicycle since she was a child. Surely the delivery boy wouldn’t be back for a few minutes.

After glancing up and down the alley to make sure no one else was about, Leta tiptoed over to the bicycle. It was old, but in good shape — clearly the delivery boy took excellent care of it. Leta pulled the bicycle away from the wall and climbed on. After one more quick glance around the alley she pushed off.

She was wobbly at first, but soon her muscle memory took over and she could put both feet on the pedals. She went to the far end of the alley and back, giggling as she barely missed the wall as she made the turn in the narrow alley.

She had already made her second turn and was halfway through her third when she heard a loud, angry voice behind her.

“Hey! Don’t you be stealing that!”

Leta nearly nearly took a tumble in her haste to hop off the bicycle. She recovered her balance and looked up just in time to see a young man striding quickly toward her.

“Now what in the blazes did ye think—” he began, then saw the ashamed look on Leta’s face.

“I’m so sorry, I just wanted to…” Leta trailed off. The man walked around Leta and inspected his produce for damage.

“It’s alright, lass, no harm done,” he said, tucking one package away more tightly. “I can’t think what you were doin’, though, makin’ off with a man’s livelihood.” Leta pushed the bicycle roughly back into the man’s hands.

“I wasn’t stealing. I’m a respectable girl. I merely…borrowed it for a moment.”

“Aye, ‘borrowed.’ Sounds much better than stealin’.” Leta turned on her heel and stomped away down the alley, doing her best to control her temper. The man leaned the bicycle against the wall and dashed to catch up, then stepped in front of her.

“Forgive me,” he said. “I was mostly funnin’ with you. I only saw you from the back first, but as soon as I saw your face I knew you weren’t a thief. I’m Declan.” He held out his hand.

“It’s good to know you. You work here?” Lena pointed down the alley.

“I deliver there on Saturdays. Maybe I’ll see you sometime?” Leta opened her mouth to speak.

“Leta! Where are you?” Hannah stuck her head out the kitchen door. “We’ve got vegetables that need chopping!”

“Coming, Hannah!” Leta yelled, waving to the cook. She turned back to Declan. “Thank you for letting me borrow your bicycle.”

“I will. Good day, Declan.” The man doffed his cap and bowed formally.

“Miss Leta.” Leta smiled one more time, then headed back into the kitchen. Hannah materialized from the shadows.

“Hannah, you scared me!” she gasped, clapping a hand to her chest. “He’s the delivery boy. His name is Declan.” Hannah smiled like the Cheshire Cat.