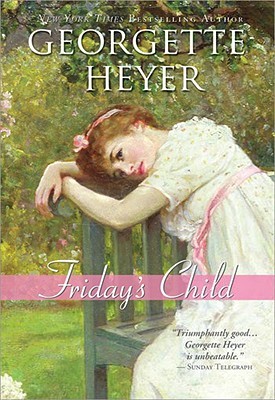 Viscount “Sherry” Sheringham is beyond furious. His considerable inheritance remains in the clutches of his greedy uncle until Sherry marries — and Miss Isabella Milborne has just refused his proposal. Sherry is determined to get his money, and vows to marry the first woman he meets on his return to London. This happens much sooner than he expects.

On the road just outside his mother’s home, Sherry sees Hero Wantage sitting on a low wall, looking miserable. The family that took her in as a child has not treated her well, and now plan to send her off to be a governess.

So the two strike a bargain: Hero will marry Sherry so he can get his inheritance, and Sherry will save Hero from having to become a governess. They agree not to meddle in each other’s lives or dalliances, and off to London they go.

Do I need to tell you what happens next?

I love Georgette Heyer. Her characters are ridiculous and her stories are wonderful. Friday’s Child is no exception.

Sherry is a gambler and something of a rake; he sees marriage as a way out of his money troubles, not as a life-altering “time to settle down” experience.

Unfortunately, Hero’s naivete makes her a prime target for anyone looking for an easy mark. She’s constantly getting to scrapes, and Sherry always swoops in to avert scandal. The couple’s friends can see the two are falling in love — but they’re just not willing to admit it.

But when Hero finds herself in her worst scrape yet, she decides she must flee London and leave Sherry to court the woman Hero believes he loves.

Her escape, Sherry’s search, their awkward reunion, and all the misunderstandings in between combine to make Friday’s Child another example of Georgette Heyer at her finest. A whole lot of silliness, and just enough romance to make this gal happy indeed.

(I read this book as part of the Monthly Motif Challenge. July’s challenge was to read a book that is guaranteed to make me laugh out loud.)