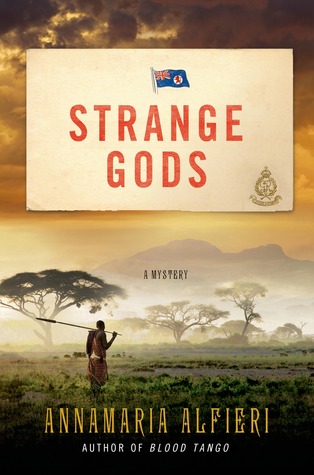 Vera McIntosh is Scottish by heritage, but her heart belongs to the people and land of British East Africa — she cannot be the well-bred, meek Scottish woman her mother wishes she could be. Inside her lurk feelings no “good” lady would have: a love of independence, a desire for adventure, and lingering thoughts of police officer Justin Tolliver.

When Vera finally sees Justin again, it’s not the tender reunion of which she’s dreamed. Her uncle, a skilled doctor and local hero, has been found dead in a nearby field with a spear sticking from his back.

Justin is determined to find the killer…as is Vera. Their investigation will take them through villages and towns, and eventually into the wilds of British East Africa. Can they discover the killer, or will he or she — like Vera’s love for Justin — remain a secret forever?

Well, not the murder part. That actually awful. But Vera and Justin’s story isn’t. They’re both good people, in love with each other and the wild country in which they’ve found themselves. Vera’s a spitfire, something I can always get behind, and Justin is intelligent and fair. They’re easy to root for.

Another excellent character is Kwai Libazo, Justin’s lieutenant. He listens twice as much as he speaks, the perfect recipe for outdoing those around you. Kwai is a great character, and comes close to stealing the show from his still-pretty-darn-British-even-if-they-think-they’re-not co-stars.

The mystery itself is well done, with suspects creeping out from under every rock. We’ve got a lush, a cuckolded husband, an angry uncle, a humiliated medicine man…everything you need to keep things interesting.

As you might have guessed from “British East Africa,” Strange Gods is set in the early 19th century when England still controlled huge swaths of Africa — the tensions between white colonists and African natives is a major theme in the story.

For the most part it’s handled well, everything from high-ranking police officials’ dislike of the natives to Justin’s kind-but-better-than-thou treatment of Kwai. Unfortunately it felt like the author couldn’t decide whether to make it central or peripheral to the story, so it kind of ended up as both, which made the story feel weaker. I’m not saying that race should have been the central conflict, but I don’t think the idea of falsely arresting and hanging an African just because it was convenient was treated with enough care.

Overall, though, Strange Gods is a solid novel and a great start to my 2016 reading challenges.

(I read this book as part of the Monthly Motif Challenge. January’s challenge was to start the year with a Who Dunnit/mystery read.)