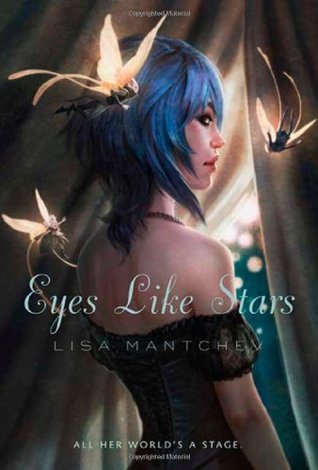 The Théâtre Illuminata is as old as time itself. Its inhabitants are magical, held together by the words their creators wrote, and bound to the theatre by The Book.

Bertie lives in the theatre, but she is not truly a part of it. She is an orphan, left on the theatre’s doorstep by the mother she can’t remember. Her life has been marvelous but strange, and her latest escapade has left her on thin ice with the theatre’s inhabitants.

Now she has just a few days to prove she can be valuable to the theatre, or she will have to leave. With four excitable fairies and a dashing pirate on her side, Bertie is sure she will succeed.

But there are more things in heaven and earth than are dreamt of in her philosophy, and not every member of the theatre wants her to stay.

A bit of a let down

I’ve had Eyes Like Stars (first in author Lisa Mantchev’s Théâtre Illuminata series) on my radar for some time. And who wouldn’t? It’s a series set inside a magical theatre where every character in recorded history lives and performs.

The characters are fun, particularly Bertie and the four fairies. I like the combination of written characters and mythological shadows, and I liked the glimpses Mantchev gives of the theatre’s inner workings — right down to the squabbles between the prop master and set designer.

Beyond that, though, I was a little confused. I felt like I was dropped into the middle of a story and not given proper context to help me understand Bertie’s world. There’s obviously a heavy dose of magic involved, but I had a hard time understanding and believing the world building.

It’s likely many of my questions are answered in the series’ next two books, but right now I can’t see myself working up the interest to check those out.

Overall Eyes Like Stars is well-written, entertaining, and provokes a certain amount of deeper thought. At any other point in my reading it might have been irresistible; this time, though, it just couldn’t hook me.

Anyone read this series? What do you think of it?