While clicking through my RSS feed last week, I came across an announcement for Feminist Coming Out Day. March is Women’s History Month, so the event is not exactly unexpected.

But it does fit in nicely with some of the recent discussions of gender in literature that have been happening in the book blogosphere:

“When did you become a feminist?”

I don’t think I heard the word “feminist” until high school, but I’ve been one for as long as I remember.

I was raised by a single mother. My father and extended family were around, but most of the time it was just my mom and me. She worked very hard to raise me, and I’m sad to say that I haven’t always fully appreciated her for that.

I’m by no means an activist, but I enjoyed brief notoriety at my high school as the “feminazi” of the theatre and choir departments. I also locked horns with a few of the guys in my university’s theatre department—mostly because they knew it annoyed me when they made rude remarks. Mainly they just did it because we all knew how to push each other’s buttons, and it was a good way to release steam.

I feel very lucky to have been born in a country where being a feminist isn’t a death sentence. I’ve never experienced any genuine hatred because of my stances, but I know lots of women (and women bloggers) who have.

But I think it’s important to continue the conversations that are already going on, and to start new ones as well. Women comprise a huge portion of the buyers’ market, and I don’t think it’s unreasonable to pay close attention to the messages we are fed through literature (and movies and advertising, etc.), and to voice our opinions when we feel those messages are unfair.

It’s an event, people, so let’s celebrate! The FCOD website has several suggestions of ways to get involved, but here are some blog-oriented ways to show your feminist pride:

Today’s edition of Top 10 Tuesday will be up later today, but for now I leave you with this: 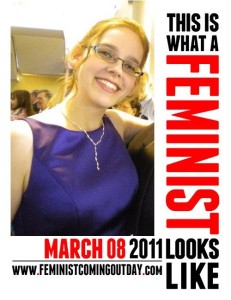