I recently stumbled across an article entitled “Boudoir photography: The divisive new wedding trend” in which the author discusses the “new” and scandalous practice of brides presenting sexy photos of themselves to their soon-to-be-husbands. May I be the first to say, sigh.

Not because I’m incensed at the trend; rather because the fact that this article exists at all makes me want to roll my eyes without ceasing until they fall out of my skull.

While it’s a blog’s goal to get pageviews, shares, likes, links, etc., I hate when brands stoop to this kind of “reporting.” The author includes statements from both sides of the discussion, but I came away from the article feeling like he/she was tut-tutting us skanky women-folk from behind the keyboard.

Brides-to-be are stripping down either partially or completely and paying to have soft-porn photos taken of themselves as a gift for their grooms.

Everything about the way this sentence is phrased makes me cringe.

My Inner Feminist gets all up in arms about the idea of making a present of racy photos of myself to my partner, but it’s coming from a personal I-think-that’s-kind-of-creepy perspective and not from a I-wouldn’t-do-that-because-it’s-just-like-porn-and-therefore-wrong perspective.

This trend may be divisive in some circles, but it’s hardly new. Image capturing techniques, the oldest being painting, have been around in some form or another since before recorded history; and as long as there has been painting, there’s been sexy paintings.

For starters, let’s talk about 16th century Europe, when portrait miniatures become popular. They were easy to tote around, and so were used to introduce nobles to each other, help drum up suitors for young women, and as tokens for people to share with their spouses. A great example of this is in Deborah Harkness’ Shadow of Night, where Diana and Matthew each have a portrait miniature of the other that is considered too personal to display to others.

Moving forward a few centuries to 1843: Artist Franz Xaver Winterhalter paints a portrait of Queen Victoria that is so scandalous that her husband, Albert, kept it in a private room and showed it to no one else. The portrait wasn’t made public until 1977. 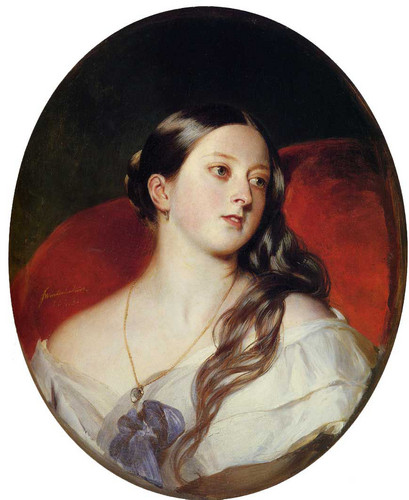 So it’s not scandalous by modern standards, but there’s definitely something sensual about it. I think it’s great.

So what’s the point of this little diatribe? I’m not sure, but I couldn’t get my thoughts about this stinky, vaguely shaming article out of my head. I actually don’t know what’s more irritating: the tone of the article or the author’s thinking they’ve discovered something new about sex and relationships.

I’d love to chat about this with you guys. Drop a line in the comments or hit me up on Twitter @AmyPeveto.