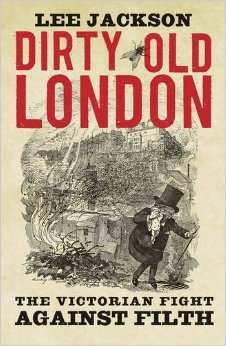 Wherever humans congregate, so too does their refuse. Prior to the 1800s this wasn’t a huge problem — there simply weren’t enough people in a single place to cause problems.

Things were different by the time the Victorian era (1837-1901) rolled around. London’s population exploded, and its ancient sewers could no longer process the tons of waste and garbage flowing in daily. Cholera outbreaks devastated the lower classes, and smoke from hundreds of thousands of chimneys produced a fog so dense it made crossing the street a potentially fatal decision.

Dirty Old London takes the reader on what may be history’s least magical journey through cesspools, sewers, cemeteries, and soot-encrusted chimneys. Along the way author Lee Jackson introduces us to the men (and women) who researched, investigated, wrote, harangued, and lied/cheated/stole their way into cleaning up “the big smoke.”

Getting clean by playing dirty

The Victorians believed that disease was caused by “miasmas,” the fetid air lurking in open cesspools, outside the tanner’s shop, and rising from the Thames itself. Even cholera outbreaks were believed to be the result of crowding thousands of unwashed bodies into decaying tenements.

Attempts to clean up London came in fits and starts for years, but real improvements were hampered by the decentralized nature of those efforts. Every neighborhood and suburb had its own vestries, made of members who did not welcome Parliament’s prying into their affairs.

So it was through a series of moneymaking schemes, greedy strategies masked as charity, and complete cock-ups that London finally started getting its act together.

Victorians get a bad rap these days because we think of them as slobs, reveling in their own muck. But what most people don’t know (and Dirty Old London shows) is that Victorians believed that cleanliness was next to godliness — it was just really freakin’ hard to get and stay clean.

Almost half the book focuses on crap: the “night soil” men who were hired to remove it (and seem to be pretty lackadaisical about it); the cesspools which were prone to overflowing, leaking, and suffocating the aforementioned men; the incredible sewer system Bazalgette designed and built after the “Great Stink” of 1858.

I found this stuff less interesting than the rest, but it’s clear that what followed — new cemeteries, the installation of public bathrooms, and legislation calling for cleaner air — could not have happened without first dealing with the poo problem.

It was also cool to see the transition from “improvement as necessity” (installing sewer systems and running water to help prevent cholera outbreaks) to “improvement as creature comfort” (bathing houses, public bathrooms, etc.).

Dirty Old London is a fascinating look at the 60-year effort to make London one of the cleanest cities in the Victorian world. It’s also more than a little gross. If you’ll excuse me, I’m going to take another shower.

(I read this book as part of the Monthly Motif Challenge. March’s challenge was to “time travel” or read a book set in a country different than where you live.)