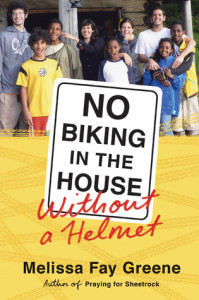 While most parents their age are long since done with such things, Melissa and Donny Greene seem to be stuck in a perpetual loop of elementary school plays and soccer games, carpools and graduation ceremonies.

As their four biological children grew, the couple realized they weren’t ready to give up on parenthood. They decided on a whim to research adoption, and over the next several years adopted five more children from Bulgaria and Ethiopia.

No Biking in the House Without a Helmet is Melissa Greene’s memoir of her family’s meeting and falling in love with five orphans who changed their lives.

Anyone who gives birth to four children and then proceeds to adopt five more is either a saint or a nutjob.

The adoption process Greene describes in the first several chapters is both daunting and heartrending. An absurd percentage of kids adopted from overseas have mental and/or physical problems, and the business that has sprung up around helping people evaluate kids is chilling.

Then there’s the travel, the paperwork, and taking a child who doesn’t speak English from the only home he or she has ever known and figuring out how to raise them. I can’t imagine how challenging the process must be, and Greene did it five times.

Good book, but not great

I enjoyed Greene’s book, but I don’t think I’m her target audience. I’m not interested in having children, and have a hard time understanding Greene’s need to have so much chaos in her life.

No Biking in the House Without a Helmet covers so many topics, so many kids, and so many stories that I had trouble keeping things straight and staying interested. It opened my eyes on the overseas adoption process, but at just over 350 page was too long and unfocused for me to stay invested the entire time.

It’s a good book…just not necessarily for me.