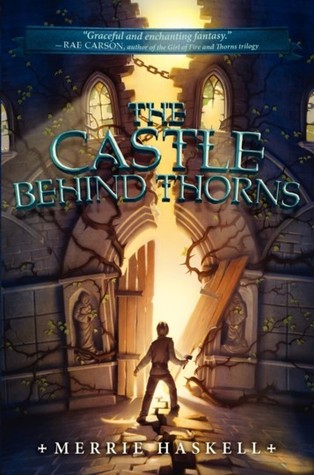 Castle Boisblanc — the Sundered Castle — has been abandoned for decades. Ripped nearly apart by an earthquake and surrounded by tall, vicious brambles, the castle is desolate and uninhabited. Until now.

The last thing Sand remembers before waking up inside the destroyed castle is a fight with his father and a wish to a long-dead saint. With no way to call for help and no way to escape on his own, Sand does the only thing he can: plants a garden and repairs the castle’s forge to mend or create the items he needs to survive.

Sand is not a master smith, but the items he repairs somehow end up better than new: a stuffed hawk reanimates, a jagged hole in the courtyard disappears. And then there’s Perotte, the lost heir to the throne, whose bones once resided in the underground crypt.

This is the work of magic — but does it come from the castle’s guardian saints, or from within Sand and Perotte themselves?

The Castle Behind Thorns is the second book by Merrie Haskell that I’ve read. Both it and The Princess Curse do a wonderful job of taking traditional fairy tale elements and recombining them in new ways.

Sand and Perotte are grown-up for their age — a product of medieval life — but Haskell includes plenty of sulking and spats to convince anyone that we’re truly reading about young teenagers.

The book treats its subject matter with a maturity that belies its Middle Grade classification. The writing is complex, foregoing talking down to its young reader audience in favor of exploring “themes of memory and story, forgiveness and strength, and the true gifts of craft and imagination.”

Merrie Haskell is a writer whose works I wish were written sooner — they’re the kind of stories I longed for and would have inhaled as a kid, just as I do now. Her characters (especially her female ones) are strong, funny, smart, and the kind of role models I think all children and young teenagers should have.

Read The Castle Behind Thorns (and The Princess Curse) to your kids, nieces and nephews, students, friends’ kids, and to yourself. They’re beautifully written, fun, and deeply engaging no matter your age.

3 thoughts on “Review: The Castle Behind Thorns”