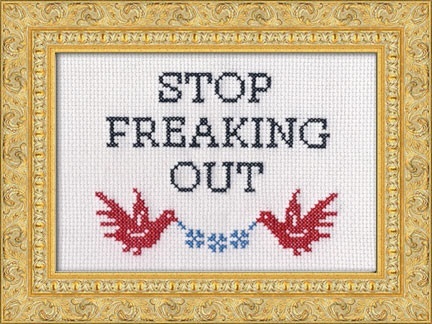 Generalized anxiety disorder is a psychological disorder characterized by “excessive or disproportionate anxiety about several aspects of life, such as work, social relationships, or financial matters.” It’s not generally diagnosed as anything other than typical worrying until an individual has experienced extreme worrying every day for at least six months.

I remember my anxiety kicking in really hard in elementary school. I hated being late; if it looked like I was going to be tardy for school, I would start crying and not want to go at all. I had severe anxiety- and food-triggered stomach aches all through school, and have only in the last couple of years gotten them under some semblance of control.

I’ve written before about the challenges of Generalized anxiety disorder, and how easy it is for me to focus on the negative; in the interest of turning the issue on its head, though, today I started thinking about some of the good stuff that comes from it.

GAD means I’m always on time (if not early)

Remember the “I cried if I thought I’d be late” story? Being on time or early diffuses this anxiety, so I’m always right where I or my calendar says I’m going to be.

I leave early enough to arrive at doctor’s appointments, client meetings, movies, the airport, and lunch dates with plenty of time to spare.

Kind of like the Boy Scouts. I’ve always got a Plan A and Plan B (and maybe Plan C).

Relatives or friends coming into town? I’ve got a list of fun things we can do. Meeting this afternoon? I’ve got a recorder so it’s easier to revisit the conversation later. Need to do three errands? I can tell you the most efficient route to travel so they get done faster.

GAD means I listen twice as much as I speak

Paralyzing fear of saying something stupid means I keep my mouth shut, giving me plenty of opportunity to listen. That’s invaluable when it comes to conversations, arguments, meetings, and any other kind of communication.

My tendency to point out flaws in a plan has likely annoyed my co-workers and friends on more than one occasion (think Debbie Downer of SNL fame).

Let’s make a change to the marketing campaign! But we didn’t estimate our budget based on that. I hear that new restaurant is great! I heard they got temporarily shut down for health code violations.

This tendency can indeed be a downer, but it also means that I’m not often unaware of the potential negative consequences of a given decision, especially when it comes to my job. Foresight in marketing is critical, and it’s easy to blow budgets or situations if you don’t come at them from all angles — even the downer ones.

Know how many times I’ve missed paying a bill of any kind? Twice. In my entire life (knock wood). Missing a payment makes me anxious, so I’ve turned my Google calendar into a reminder machine.

I’ve got notifications set up for paying my credit card bill, rent, Netflix bill, and even yearly plans for adding money to my savings account.

In my chemically off-balance brain, failure of any kind is unacceptable. I do everything I can to avoid it, which means that you’ll never catch me slacking. On anything. Except maybe cleaning.

This means that problems get solved pretty much immediately. I dust the dirty coffee table now, I pick up that pile of stuff now, I make the bed now, I email the client now.

This contributes nicely to my editing skills. I catch the little stuff (a comma instead of a semicolon or period, bullet points with inconsistent punctuation, missing closing parenthesis, etc.) that sometimes others don’t, or are willing to ignore. This improves both my writing and the writing of clients and co-workers.

Mistakes are abhorrent to me, and I tend to learn from them quickly.

Forgot to add labor into that estimate last time? Never again. Parked under that tree and now my car is covered in bird crap? Park somewhere else. Poked fun at a friend on a sensitive topic? Seek forgiveness and never speak of it.

This comes in most handy at work (where I’m anxious to do well and not disappoint) and when it comes to my health (skipping weekly yoga is a terrible idea).

No one wants to feel like they’re crazy. I wasn’t thrilled about the idea of medication (which made me feel like garbage and so I’m med-free now), and sure as shit didn’t want some official diagnosis following me around for the rest of my life.

In the end, though, becoming “official” was a blessing. CBT is helping me find ways to get and keep myself under control, and I’m learning to accept myself as-is and use my anxiety against itself.

Anxiety; it isn’t for the faint of heart, but at least I’m trying to look at in a positive way.