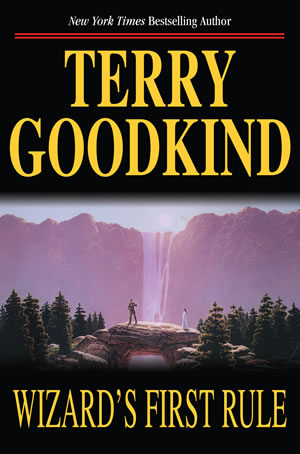 Only weeks after his father’s brutal murder, Richard stumbles upon a mysterious woman who is being stalked through the forest. Her name is Kahlan, and Richard can tell she is hiding secrets. Which is fine, because so is he.

Strange things are happening in the Westlands. The boundary between it and the Midlands — a land of magic — is failing, allowing creatures of unimaginable horror to slink through.

With the help of Kahlan and his lifelong (and rather…odd) friend Zedd, Richard must travel across the boundary and find a way to defeat a terrible enemy. Through this journey he will learn incredible truths about himself and his companions, and face horrifying foes whose remorseless thoughts and actions chill the blood.

Will Richard embrace his destiny, or will evil prevail?

[pullquote]Whether I was chuckling or fighting revulsion, Goodkind’s novel had me hooked from the word go.[/pullquote]

Terry Goodkind’s Sword of Truth series is well-known in the fantasy genre, but I’d missed out until Best Friend found an old copy of the the first in the series at Half-Price books and insisted I read it.

Whether I was chuckling or fighting revulsion, Goodkind’s novel had me hooked from the word go.

The story spools out slowly, each chapter revealing more of the characters’ secrets. It was so much fun to guess at what was coming next, only to be blindsided by something totally new that made the tale even more awesome.

Here there be spoilers

I’m always happy to meet a kickass female character, and Kahlan fits the bill. She’s powerful, but more importantly is intelligent and selfless. Goodkind’s concept of a Confessor — someone who forces others to tell the truth by means of the world’s oldest and most powerful magic — is intriguing, and I find myself wanting to read more of the series just to learn more of the lore.

In sharp contrast — and yet in parallel to — Kahlan’s power is that of the Mord-Sith, women who have known only pain and so have only that to give. Scenes involving these characters were by far the hardest to read.

Given Richard’s true heritage (and even Zedd’s), I’m interested in seeing where the series goes next. The trio saves the day this time, but something tells me shit’s about to get real.

If you love swords and sorcery, strong female characters (good and bad), and aren’t bothered by blood and violence, I highly recommend you check out Wizard’s First Rule.

There’s over a dozen books in the series already published, so you won’t be in agony waiting for the next one. Give it a shot, and let me know what you think!