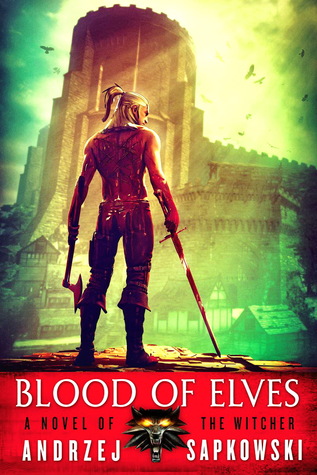 Humans, dwarves, gnomes, and elves have coexisted peacefully for over a century. But that peace has always been tenuous, and now The Continent is on the brink of war. Skirmishes are common — especially on the border between the Northern Kingdom and the Nilfgaard Empire — and everyone is choosing sides.

Except for Geralt of Rivia. He’s a witcher, one of the few remaining monster killers. His job is killing, not politics.

But Geralt’s destiny is far larger than he realizes.  He and his ward, the child Ciri, are at the center of a prophecy that will change their world — and may destroy it forever.

A bit of backstory

My first encounter with the witcher world was 2015’s The Witcher 3: Wild Hunt, the third game in a series created by CD Projekt RED. It’s a great game that I still enjoy playing, but I had no idea it was based on a book series until recently.

Geralt of Rivia first appeared in a short story written by Andrzej Sapkowksi and submitted to the Polish science fiction and fantasy magazine Fantastyka. Sapkowksi expanded the world with dozens of short stories and published his first novel, Blood of Elves, in 1994. The first Witcher game was released in 2007, and Blood of Elves was translated and released in America in 2009.

I’m an enormous fantasy fan, and loved every second of The Witcher 3. The way the game itself works and is crafted is amazing, but I also loved the characters. Wouldn’t it be great, I thought, if there was a way I could read more about them?

So of course I was ecstatic when I found out about Sapkowski’s short stories and novels.

Sapkowksi’s world is large and complex, and you get thrown right into the deep end from the first page; I recommend you check out How to Get Into the Witcher Novels before you dive in.

This novel has two of my favorite things: detailed world building and fantastic characters. And it’s got both in spades.

The Continent was once a much less dangerous place. But when it collided with other planes of existence, all kinds of Bad Stuff made its way over. Normal people, even knights and warriors, were not able to keep the monsters under control and protect the people.

Thus were witchers created. Young boys (rarely girls) were taken from orphanages and ditches, trained in fighting and basic magic, and given powerful mutagens. These mutagens gave them the additional strength, reflexes, and supernatural powers necessary to defeat the things that go bump in the night.

Yet for all the good they do and people they save, witchers are considered half-monsters themselves. They recognize no laws but their own, and will dispatch a monster only if paid well enough for their trouble.

They live in a moral gray area — Geralt in the grayest of all. He’s caught between warring factions, all of which would love to have an assassin on their side. He also knows that his ward, Ciri, is more than she appears, but isn’t ready to admit just how powerful and important she is — or how vital he is to the prophecy surrounding her.

Geralt is the protagonist of Blood of Elves, but the novel is packed with many great characters — several of them female and total badasses.

Although Ciri is young (around 13 when the book opens), she’s intelligent and clearly powerful. She’s also curious, stubborn, and brave.  She’s the most truly good character in the novel.

The sorceress Yennefer is much (much) older, and much more jaded. She inhabits some of the same gray areas as Geralt, and in some ways is more of a bad guy than many of those the reader meets.

The more I read of Blood of Elves, the more I wanted to read. These characters are tough, nasty, strong, and trying to do what they think is best — either for themselves or for their world. I love seeing how they react to the situations Sapkowski throws at them.

I didn’t love this

As much as I love fantasy novels, I don’t often enjoy what seems to be their mandatory political intrigue plots. I wanted to learn more about the world, the characters, and the prophecy swirling around Ciri — not about wizards colluding with various leaders to gain more power for themselves, or how Nilfgaard is encroaching on the Northern Kingdom again.

Seriously, did we need that entire chapter with the group of wizards talking about how armies can/should/shouldn’t cross a river to fight? It all seems so meaningless when set next to a prophecy that could mean the end of the world.

Plus, it’s an election year, and I’m dealing with enough political garbage in real life. I don’t want to read it in my books.

I loved Blood of Elves. It’s got everything I love in a fantasy novel, and I’m so glad to get the opportunity to read the stories that inspired a game I enjoy so much.

In what turned out to be a fortuitous mistake, I actually read The Last Wish, Sapkowski’s first set of short stories, before I picked up this novel. There’s an additional set, The Sword of Destiny, that wasn’t translated until last year but is set chronologically between The Last Wish and Blood of Elves. I think reading both of those anthologies will give folks new to the world some much-needed context — I know it really helped me. Then you can hop right into the novels and enjoy them more.

Fantasy lovers and those who enjoy getting totally immersed in incredible worlds will love Sapkowski’s stuff. Go check it out right now!

(I read this book as part of the Monthly Motif Challenge. September’s challenge was to read something steampunk, science fiction, or fantasy.)