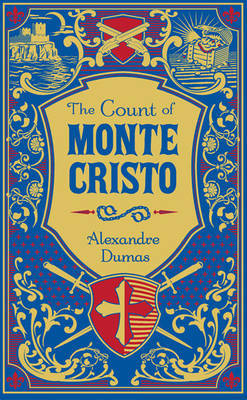 Edmond Dantès’ return to Marseilles in early 1815 is a happy one. He’s just become captain of the merchant ship on which he’s been sailing, and his good fortune has provided him the means to better care for his father and finally marry Mercèdés, the women he has loved for many years.

But there are others who are not so pleased with Edmond’s success. Together these men—Danglars, a sailor who believes he should be captain, and Fernand, who covets Mercèdés—hatch a plan to frame Edmond as a Bonapartist traitor to France.

Although the chief prosecutor, Villefort, knows that Edmond is innocent, the discovery of his own father’s role in the scandal seals the young man’s doom. Villefort leads Edmond to believe he will be released, but instead has him sent to the Château d’If, a prison from which no man ever returns.

After years of silent suffering, Edmond makes the acquaintance of another prisoner, a “mad priest” who claims to have a secret fortune. The two become friends, and it is the priest’s death that gives Edmond his means of escape — and a path to revenge.

I forgot what a bear of a novel this is — I’ve been lugging it around and pecking away at its 1065 pages for over a week.

It’s a great plot, but there’s just so freaking much of it. There’s at least a dozen “main” characters, even more locations (homes, apartments, prisons, etc.), and even more plot lines. Add to all this the fact that Dumas never says in 25 words what he can stretch into hundreds, and you’ve got a recipe for a chunkster of a novel.

Dumas really is a masterful storyteller, and I was consistently amazed at his ability to weave so many plotlines together. Edmond’s plan for revenge is a long-term one, to say the least, and it was exciting to see everything coming together.

That said, I think I was as dissatisfied with the outcomes of said revenge as was Edmond — those who condemned him were punished, but so were several innocents who had the misfortune of being related to the guilty parties.

It’s not really until the final chapters of the story that the theme becomes obvious: retribution is not worth the cost, and forgiveness is the only way to heal.

So although I find the book’s ending much less satisfying than its 2002 film adaptation, I can appreciate the lessons Dumas was teaching. Still not one of my favorites, though.

2 thoughts on “Review: The Count of Monte Cristo”