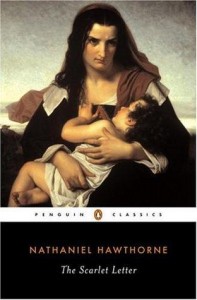 Set in 17th century Puritan Salem, Massachusetts, The Scarlet Letter tells the story of Hester Prynne, a woman who has a child out of wedlock. She refuses to give the name of the child’s father, and for her actions is forced to forever wear a large scarlet “A” on her clothing as a sign of her sin.

Hester is a kind young woman, and her silent dignity and compassion for the poor, sick, and dying soon lends to her scarlet letter a different meaning altogether.

But when her husband comes ashore at the colony, he is determined to discover Hester’s partner in betrayal, and he will stop at nothing to ensure the punishment of them both.

This is likely heresy in the eyes of the literature gods, but I’m going to have to give The Scarlet Letter an overall “Meh” rating.

I understand why it made such a splash, and was so scandalous, when it was first published in 1850. The themes of sin and guilt sent clergy into a tizzy, as did the not-so-subtle condemnation of Puritanism and Hester’s decision to live by her own set of morals instead of the church’s. Add to that the fact that adultery was hardly something one wrote about, and you can see why it was scandalous — and almost immediately successful.

As someone who struggles with reconciling Christianity’s supposed mores and some Christians’ hypocrisy, I appreciate and am proud of Hester’s decision to separate herself and live in a way she deems honorable.

But on the other hand, ugh. This book made me feel the same way as when I read The Lion, the Witch, and the Wardrobe:

SYMBOLISM! METAPHOR! THE SCARLET LETTER MEANS SOMETHING TOTALLY DIFFERENT! THE BRANDED “A”! DO YOU GET IT?! IT’S ALL SYMBOLISM!

I had a mild headache the entire time I was reading because I felt like I was being whacked over the head with heavy-handed symbolism. I get it; can we move on to developing the plot now?

The themes are great (and still relevant). But the story has lost a great deal of its shock value — what made it impactful on the first readers. And what’s left is surrounded by so much unnecessary LOOK IT’S SYMBOLISM DO YOU GET IT? that it’s hard to enjoy the tale.

So am I missing something totally great about The Scarlet Letter? Feel free to take me to task in the comments.

2 thoughts on “Review: The Scarlet Letter”