This past Sunday was my quarter-of-a-century birthday, and it was fantastic! I got to see one set of parents, eat a bunch of good food, see “Rock of Ages” (it was amazing — seriously, go see it right now!), and get some relaxing in before what’s turning into a really long work week.

Oh, and of course I got books. 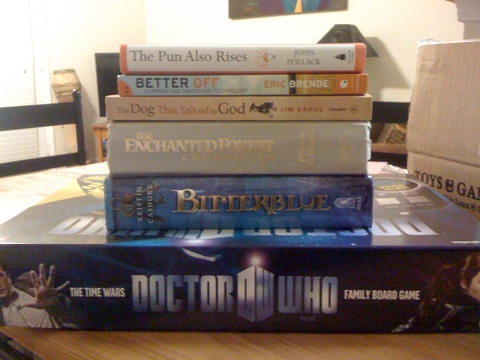 A book about my favorite kind of joke: the pun. An overlooked and under-appreciated form of humor that is often considered low-brow, but actually requires a great deal of wit to appreciate. Here’s hoping this one’s…punny.

Better Off: Flipping the Switch on Technology (Eric Brende)

The tale of a husband and wife team who live technology-free for a year. My job revolves around technology, and sometimes I worry that we as a species are becoming too independent on it. I’m interested in seeing what the author and his wife uncover during their experiment.

The Dog That Talked To God (Jim Kraus)

When Mary’s miniature Schnauzer Rufus tells her that he can not only talk, but talk to God, she has no choice but to believe him. Soon Rufus is offering advice to Mary on how to overcome the loss of her husband and move on with her life, but will Mary listen? I’ve seen this one describe as “quirky” but “inspirational.”

This series of four books follows the adventures Cimorene, a “princess who refuses to be proper.” She’s so improper, in fact, that she runs away from home to live with a dragon. A favorite series of my teenage years, and I’m looking forward to revisiting it.

Sequel to the much-adored Graceling, Bitterblue picks up eight years after Katsa’s tale. Bitterblue is now queen of Monsea, but the remnants of King Leck’s sick reign still cling to the shadows. Adventure, action, a little love, and hopefully another kick-ass feminist heroine!

Okay, so it’s not a book. But it is super nerdy! Join the Doctor on an adventure through the universe, collect enemies, and watch out for time vortexes. Also includes a trivia aspect, perfect for fans of the show. Can’t wait to play it!

Which book should I read first?