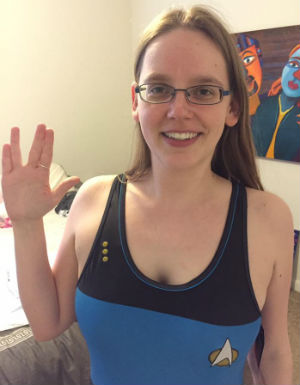 In the 1991 film City Slickers Billy Crystal’s character says, “…when I was about 18 and my dad and I couldn’t communicate about anything at all, we could still talk about baseball.” For me and my dad, it was Star Trek.

As a kid, I took in the original series, bits and pieces of The Next Generation, and the films. By the time I was in middle school, Dad had taught me the Star Trek lessons he considers most important:

I’ve lost count of the number of times we watched the movies together, but I do know that we watched The Undiscovered Country the most. It’s got the best setting (crazy ice planet), the best supporting characters (Iman as the shape-shifting Chameloid), and the most irritating villain known to man (seriously, no one quotes Shakespeare that much).

The film pits Captain Kirk against the Klingons, who blame him and Dr. McCoy for the death of their chancellor. The pair is sent to a penal colony from which they must escape in time to thwart another Klingon assassination. Shenanigans ensue.

Oscar-winning material it ain’t, but for me that was never the point. The Undiscovered Country was a silly-but-serious movie my dad and I could watch together and then talk about. It gave us a framework for talking about bigger things, like the value of friendship, of planning, of intelligence and humility.

My dad and I are logical like Spock, but hot-headed and stubborn like Kirk. The Star Trek movies gave us insight into each other’s personalities and helped us understand each other’s perspectives. They helped us talk when all it seemed we could do was fight.

I’ve watched later series and movies with my husband, but I always find myself texting my dad about the latest plot twist. I take a picture of my television with The Undiscovered Country playing for the billionth time and text it to him along with, “Guess the movie!”

Star Trek has helped me in countless ways as I journey through my own undiscovered country. Kirk bashes around in my brain, pushing me to speak out and be brave; Spock sits quietly nearby, reminding me that my anxiety is something I must control so that it does not control me.

And in my mind’s eye, I see my father, explaining what a Chameloid is and giving me a fake Vulcan nerve pinch. I remember conversations we’ve had and jokes we’ve shared. I pop in the DVD yet again and send him a text: “Three guesses what I’m watching today. I love you!”