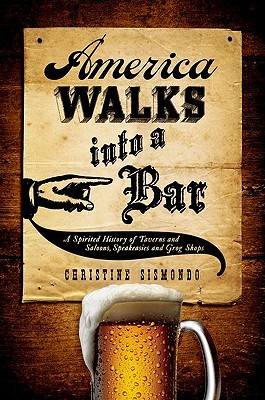 The bar. What is today a sticky, crowded space whose blaring televisions and tchotsky-covered walls dull the will to live has a long history of nurturing dissidents and serving up rebellions.

The American Revolution fomented in taverns in Pennsylvania and New Jersey. Abraham Lincoln’s killer plotted with his conspirators in Surratt Tavern. Bar owners smuggled runaway slaves through their backrooms during the Civil War, and bootleg liquor during Prohibition. After World War II, the women who had taken over as bartenders fought for their right to remain behind the bar (and sit at it, too). The Stonewall riots spilled onto New York City streets as gay men and women protested against prejudice and violence against their communities.

America Walks into a Bar: A Spirited History of Taverns and Saloons, Speakeasies and Grog Shops takes a chronological look at bars and the cumulative effect they’ve had in the development of our country.

Do bars really matter that much?

I’ve never enjoyed bars. They’re crowded and loud, two things that shoot my anxiety through the roof faster than almost anything else.

So it was with trepidation that I picked up America Walks into a Bar. Would it be possible for author Christine Sismondo to convince me that bars have a purpose beyond helping people get schnockered?

Turns out, yes! Bars were instrumental to everything from the American Revolution to everyday politics to desegregation and feminism, and to this day continue shaping life in the US.

Bars were once much closer to the center of town life than I realized. The Puritans may have built churches first, but for most other settlements the first thing that went up was the bar. It acted as church, meeting room, and courthouse while the rest of the town was built.

Lots of bad ideas were hatched in bars — assassinations, rebellions, briberies — but a lot of good has come from their existence, too.

Although its role in everyday life has diminished significantly, the bar is still sparking debates and movements. Should bars be “family” establishments, or do owners have the right to prohibit toddlers and strollers? What’s the “right” way to drink: a cold beer in a frosted bottle, or something whipped up by a bearded hipster with a canister of liquid nitrogen?

The only thing Sismondo knows for certain is that the bar can never escape its past:

Whether it is blamed on evangelism, the puritan work ethic, or its past as a space for radicals, immigrants, and the disenfranchised, even the most sanitized corporate ersatz roadhouse, replete with piped-in elevator music and bartenders adorned with eighteen pieces of ‘flair,’ the American bar retains a tiny bit of grime that simply cannot be washed off. And that stubborn residue is the hangover from three centuries — going on four — of vilification, adoration, rabble-rousing, escapism, and revolutionary idealism at work.

And why would it want to?