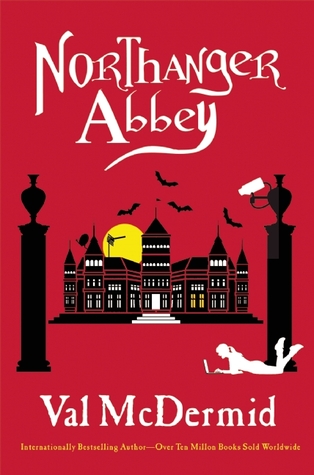 If someone asked Cat Morland to compare the little village of Piddle Valley to anywhere else in the universe, she would definitely say, “The dark side of the moon.” Just when she’s beginning to think that the only adventures she’ll ever go on are the ones she reads about in books, family friends the Allens invite her to join them in Edinburgh for the fabulous Fringe Festival.

Cat loves the festival’s shows, but she’s thrilled to become besties with the lovely Bella Thorpe — and then of course there’s Henry Tilney, a promising lawyer whose family owns the mysterious Northanger Abbey.

Cat can’t believe her good luck when Henry and his sister Eleanor invite her to visit them at their ancestral home. But her joy quickly evaporates into suspicion. What secrets hide behind the locked doors of Northanger Abbey? Has Cat just read too many scary books, or are the Tilneys hiding a dangerous secret?

You wouldn’t think there would be a way to improve on Jane Austen’s original Northanger Abbey, and in some ways there’s not. But Val McDermid does a fantastic job of modernizing this classic nail-biter/laugh-inducer for a new generation.

Cat is a wonderful heroine, genuinely kind and good-hearted. Her naivete is what makes the novel possible, and I spent half the time praising her intelligence and the other half lamenting her apparent lack of sense.

There’s a love story, of course, but something I appreciate about this modernization —  and Austen’s original —  is that Northanger Abbey is just as much about friendship, finding out who’s worth your time and who’s not. It’s a hard lesson at any age, especially when you’re a teenager.

On the flip side, it’s so fun to watch Cat’s paranoia ramp up throughout the novel. You know it’s all going to come to nothing — you’re pretty sure, anyway — but in the meantime it’s fun to let yourself get carried away by your imagination.

There’s one part of the ending that I feel was a bit of a misstep, or at least one that felt like it came from left field. The true reason for Cat’s being sent away from the Tilneys’ home seems forced, like McDermid got to the last couple of chapters and realized that Cat and Henry hadn’t gotten together yet, so she manufactured a quasi-deus ex machina ending.

All in all, though, McDermid’s Northanger Abbey is a great addition to The Austen Project, which asked six bestselling authors to craft modern retellings of Austen’s most popular works.

Beware, though. John Thorpe will make you want to reach through the pages and punch him in the face.

Have a modernization/retelling you love or loathe? Let me know in the comments.