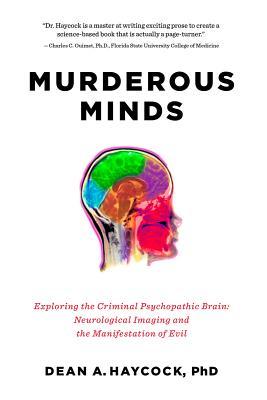 Disclosure: I received a free copy of Murderous Minds from publisher Pegasus Books, LLC, but was not compensated for discussing/reviewing it. My thoughts on the book are my own.

Have you seen a movie or television show featuring a serial killer or heard about a school shooting and thought, “That guy’s a psychopath”? To many this is a correct assessment: if you behave in a psychotic manner, obviously you’re a psychopath.

Unfortunately it’s not that easy.

Recent advances in technology have given neuroscientists more detailed ways than ever before to study the brains of psychopaths, but not have reached a consensus as to which part(s) of the brain are involved in psychopathy, whether it’s caused by nature or nurture (or both), or which treatment options are best.

The value of being able to identify psychopaths using fact-based science is incalculable, but have we considered the implications of doing so?

Murderous Minds: Exploring the Criminal Psychopathic Brain: Neurological Imaging and the Manifestation of Evil is a deep dive by neuroscientist Dean Haycock into the world of psychopathy research and treatment.

Although the forward of Murderous Minds praises Haycock for rendering his book’s complex subject matter “readily digestible,” it’s clear why “for everyone” was not added to the end of that thought.

I had to read more slowly and deliberately than I usually do, and muscled through a lot of complicated information; I can’t imagine reading about this same topic on the higher level to which Haycock is undoubtedly more accustomed to writing.

It’s not easy reading, but it’s good. Haycock mixes in just enough real-world examples and plain language to make the challenge interesting instead of frustrating.

Turns out the medical community hasn’t quite settled on the definition and characteristics of psychopathy, or even what causes it. In typical scientific fashion there’s a lot of this kind of thing going on:

Throughout the book Haycock focus on study after study, each showing that a different part or parts of the brain are affected by, caused by, or even cause psychopathy.

He also bursts a couple bubbles blown up by the media, who in their attempts to simplify the science for mainstream audiences have misrepresented the findings.

Is there a reason for psychopathy?

I’ve written before about evolutionary psychology, one of my favorite college psychology class topics. I didn’t expect it to make an appearance in Murderous Minds.

In chapter 11 Haycock ponders whether there might be an evolutionary advantage to psychopathy; if it was incongruent with humanity, according to the theory, it would have died out eons ago.

But it’s still around, even at the small rates of today. Could there be an evolutionary advantage to being a psychopath?

[A psychopath’s] unique genes…including any that might predispose him and his offspring to traits of self-interest, lack of altruism, and lack of empathy, are safe for the time being…With the human species facing extinction as it did around this time, with the human gene pool shrunk by the loss of thousands of its members due to environmental change, behavior motivated by self-interest might have a survival advantage.

Haycock also take this theory into future apocalyptic scenarios, concluding that in an end-of-the-world scenario, “psychopaths may survive better than those of us with a conscience.”

So…are you a psychopath?

Probably not. At least not a successful criminal psychopath, or a psychopath on the level of Eric Harris or Brian Dugan.

You could certainly develop psychopathy-like traits as the result of traumatic brain injury (heard of Phineas Gage?), but generally if you make it to adulthood with your empathy intact you’re probably in the clear.

That said, research indicates that one in 100 people is a psychopath. Check 99 friends and acquaintances; if they’re all fine it’s probably you.