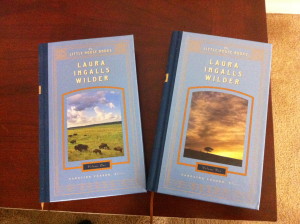 My favorite Christmas gift from 2012 was this special two-volume collection of Laura Ingalls Wilder’s Little House Books series. I read them dozens of times as a kid — especially Little House on the Prairie, which I read so much that the cover fell off. And when I opened this present from my mom at Christmas, I shed a few nostalgic tears.

As Kathleen Kelly says in “You’ve Got Mail” —

Re-reading these books was a strange experience; I felt like I was coming home, but at the same time it was totally alien because I was reading from a very different perspective.

The Little House Books series is made up of nine separate books. Most follow Laura and her family, with one book—Farmer Boy—telling the story of Almanzo, Laura’s future husband. The books span approximately 15 years, from the time Laura is five or so until a few years after her marriage at 18.

The stories are not what most people these days would consider thrilling. The subject manner feels small in many ways: descriptions of travel by covered wagon, surviving on wheat during harsh winters, Laura’s months as a schoolteacher, and planting/harvesting season after season.

But I cannot consider Laura’s books anything less than magical. They showcase in great detail the history and process of settling the American west, taming the land and building towns and surviving despite floods, never-ending blizzards, wild animals, and other natural hazards.

I love this series mix of history and storytelling, and I love seeing Laura grow and change throughout the years. It had been a long time since I’d read any of the books, and reading them in chronological order gave me a much better sense of the story’s overall scope and narrative.

A note on music

Music features heavily in the Little House Books. Laura’s father (known as “Pa”) was a talented fiddle player, and the entire family would gather together—especially in the winter, when they were pretty much stuck inside—to sing.

Many of the songs are well-known traditional tunes — things like “Camptown Races” and “Barbara Allen,” for example. But less than 40 pages into the first book, Little House in the Big Woods, I nearly jumped out of my chair when I saw these lyrics:

Shall I be carried to the skies
On flowery beds of ease,
While others fought to win the prize,
And sailed through bloody seas!

The appendix has this listed as a stanza from “Rock of Ages (Cleft for Me),” but these same words are used in a Sacred Harp tune called “Living Lamb” (and probably several others — they use lyrics over and over).

This is the most recent in a string of instances where I come across Sacred Harp references hidden in my childhood. It reminds me again how lucky I am to have found something that means so much to me. 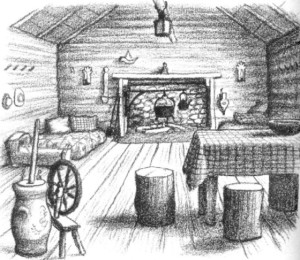 I was bummed that this special edition didn’t contain illustrations. Garth Williams was the original illustrator for the series, and I remember well his detailed black and white sketches. They brought an extra touch of life to the books, and I can’t think why they weren’t included in the special edition.

The series as a whole is amazing, but I found myself very disappointed in the final book, The First Four Years. It’s much shorter than the previous eight books, less of a story than a catalog of facts of Laura and Almanzo’s first four years together. Their attempts to farm in the Dakota Territory do not go well, and Laura loses her second-born child, a son, only a few weeks after his birth (her first child, daughter Rose, lived).

The tone was just so different, much harsher and less spirited than the rest of the series, that I had to look up so more information. Turns out a draft of The First Four Years was found in Rose’s possessions after her death. It’s not clear if the book was just a first draft, or whether or not it was meant to be a part of the Little House Books series. It didn’t undergo any editing prior to publication, and it reads that way.

Despite those minor complaints, I think the Little House Books are some of the best stories for children ever written. They’re great for reading aloud with children, and reading them as adult gives you a greater appreciation for those who fought so hard to make America what it became.

I love these stories, and I hope you do, too.